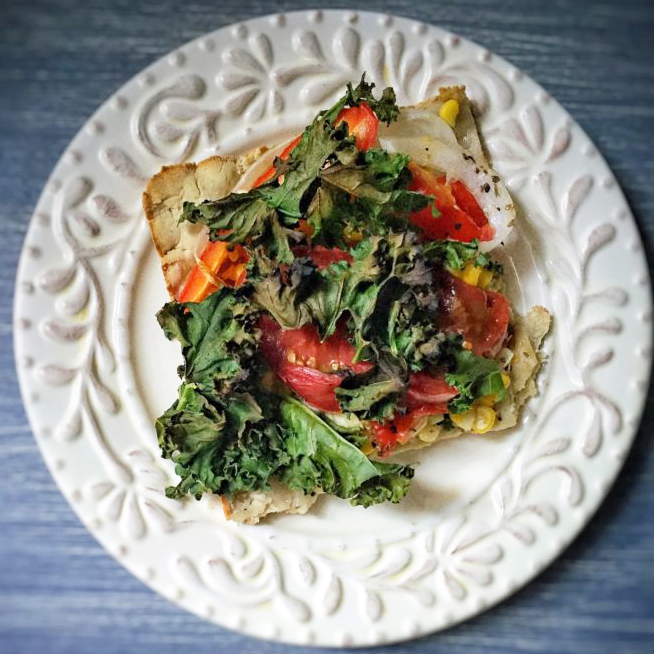 While I’ve always had a strong bias toward fall (chai + blankets + books…), I can’t ignore the fact that summer has some of the best, most colorful produce. Tomatoes! Eggplant! Basil! It’s a vegan’s paradise walking through the farmer’s market awash in the hues of the rainbow. Even I admit that same walk in the chilled air of October or November, when the bins are full of root vegetables and onions, is not quite as thrilling.

As an homage to this season I love to hate, I made a greatest-hits mixed tape of a meal: pizza. In the past, I’ve not had great luck with making my own dough for things, including cookies and pies, and yet this homemade dough courtesy of the one and only Smitten Kitchen is something even I could tackle safely. It doesn’t require hours of rising time, and it was easy for me to adapt it to be gluten-free by using Bob’s Red Mill Gluten-Free All Purpose Baking Flour.

My baking sheet was on the smaller side, which I recommend because it allowed the crust to be solid enough to support this hefty load of veggies. (I was actually surprised it did, and I had been prepared to do an entire redo as I layered on the toppings…#recipetesting.) If your sheet is bigger, though, just use slightly fewer toppings (I’d recommend skipping the peppers and using fewer tomatoes if that’s the case), or, as Deb suggests, doubling the dough recipe.

This pizza is pretty simple–there’s no “sauce” or cheese, even the vegan kind–so if you’re craving something more traditional here, sprinkle some nutritional yeast on your slice for a cheesy flavor. But honestly, the fresh flavors of summer shine as bright as the sun that grew them, and deserve to be enjoyed in their purest form–while they last! 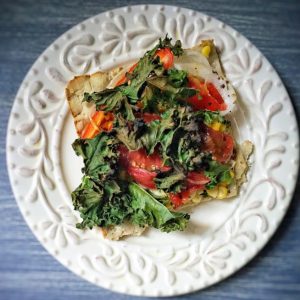 When you come home and find your herb babies all g