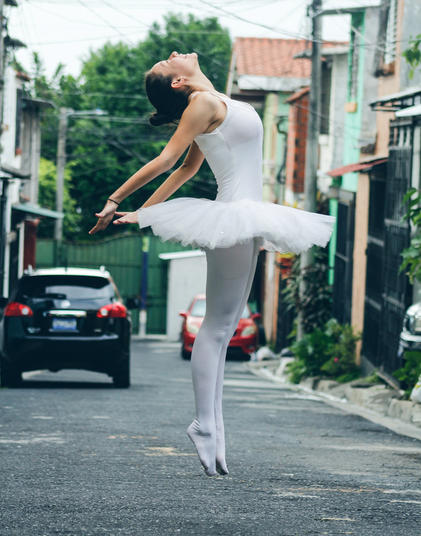 I grew up signing, rocking out to boy bands on my discman during car rides to Long Island, performing in choirs, and knowing that it felt good in my body to sing even if it wasn’t “good enough” (according to me, that is) to warrant my having a solo in a musical or attending a special arts-focused school. Contrary to all genetic evidence, I had somehow acquired an intuitive sense of rhythm and musicality that made this art form, along with dance, come naturally to me; in the presence of tonalities my body responded without my mind’s interference, though I quickly learned how even the smallest amount of mental energy could improve my performing exponentially.

But I never needed my brain to tell my body that I was experiencing “joy” in these moments. My choir teacher in junior high described the feeling, especially in a group setting, as “pet the stingray”—that electric frisson of energy that pulses deep in your cells when everyone’s together, not only in pitch and rhythm but in soul and intention.

Then, I stopped singing. I had other things to do—things involving my brain and books, lots and lots of books I read silently to myself—and other people’s voices became more important than mine. Music was something I put on the background as an afterthought, and usually the kind without words because it would distract me from channeling the brilliant literary insights I thought my undergrad mind could conjure.

I convinced myself, with the help of some persuasive adults who noticed my academic “potential” (which ultimately manifested from the same focus one could apply to making art well—a flow as they say), that the mind was the safest way to success in all areas of life. The mind never wears out, whereas knees and vocal cords do. I listened to them, and also to my friends with all their devastating problems and shriek-worthy joys. I quietly snuck out of parties before 11 PM—as soon as it got loud enough where I’d have to project my voice to be heard.

In the chakra system, the seat of the voice is in chakra five—Vishuddha—located at the throat. The Sanskrit meaning is “purification,” and one way to channel it is by chanting the mantra “sat,” or truth (often said as “sat nam,” or “I am truth.”). Breaking this down, the throat is the channel by which the body and mind rids itself of toxins to reveal an inner truth. A channel that I, for most of my life, had been slowly building a dam across.

Vishuddha also happens to be the byway to the heart, located just below it in the center of the chest (versus the physical heart). It is the seat of love, of course—the thing that’s acknowledged by almost every culture and language, and in which almost every other culture and language outside of English there are multiple names and contexts. In Chinese, for instance, there is a linguistic distinction between familial and romantic love; we’ve even classified five “love languages”—ways of expressing our love through behaviors and attitudes. And as the HeartMath Institute and others centers for scientific research purport, the heart is the seat of our truest intelligence—the knowledge and wisdom not in our brains, but just across the throat channel.

Science further suggests that the “pet the stingray” effect is real. Singing together has empirical effects on social bonding as well as our biochemistry, making it “the perfect tranquilizer, the kind that both soothes your nerves and elevates your spirit,” per a report in TIME magazine. The ancients were clearly onto something when they classified the chakras as they did, for it makes perfect sense that in using our tool of purification we become more aligned with ourselves—calmer and more focused—and more in tune with all those around us, allowing for evolutionarily favorable social conditions.

But just as we all have voices that are designed to be heard, we all have the ability to turn them off—or let them be turned off by others. When the brain becomes the primary organ of decision-making, the throat doesn’t need to do its job so much in providing access to the heart. Consider the posture of an assiduous young scholar, hunched over her books and then schlepping them around from one desk to another. Quite the opposite from the proud-chested singer or dancer, whose grace exudes merely from the posteriority of her shoulders.

What makes us learn to close off our hearts in this way, to deny ourselves access to the full spectrum of our intelligence? When do we decide it’s better to distrust our voices, the ones that are praised and applauded when we first use them as babies but later told to “be quiet” unless given permission? What makes us think we don’t deserve to be electrified by singing together? So many factors, especially the simple fact of being born a woman. Two X-chromosomes, it seems, are enough to erect an inevitable-seeming “Do Not Cross” sign over our throats, keeping the heart and mind divided like warring cities.

I’m tired of the quiet soundtrack of living in my brain, where questions are played on an endless loop of judgment and not-enough-ness only to receive a silent answer. It’s time that we all undam the voice within us, to have the songs in our hearts—our truths—pour forth. With that act of courageous self-liberation, we each have the power to radically shift the course of our lives—but more importantly, to together widen the channel of truth and harmonize more fully with the knowledge that we can all take part in the wellspring of love.