The Surprising Thing I Learned from Switching to Natural Deodorant (& No, It Wasn’t How to Sweat Less) 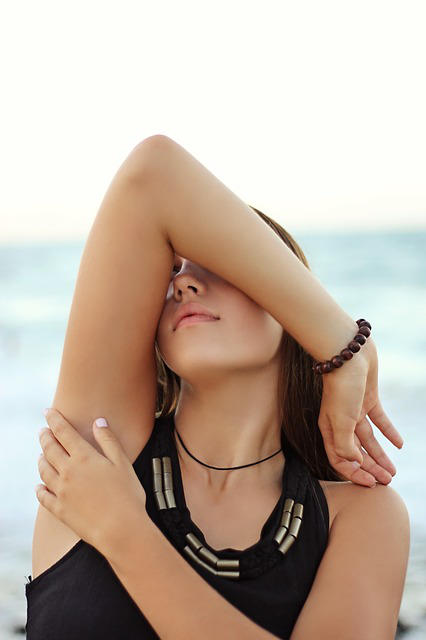 It started as many of my greatest clean-beauty-aha moments did: with a free sample. Nestled in my monthly magenta gift—no, no that, but my Petit Vour subscription box—was an entire stick of Blissoma’s Scentless natural deodorant. I opened it, smelled it (yes, it was scentless), and continued to peruse the other items in that month’s selection—items whose efficacy I was more confident in, as products as well as in their ability to make me feel happier in some je ne sais quoi unquantifiable way. A major part of why I’d subscribed to PV was to start assembling an arsenal of natural, cruelty-free makeup and self-care products that would relieve me of the long-time ambivalence I’d had toward my appearance. I never thought of my looks as my strongest asset, and so I completely ignored them for as long as I possibly could, instead focusing on my intelligence and education as quantifiable, competitive measures of self-worth and attractiveness. But as I became vegetarian, then vegan, and slowly realized how my lifestyle and sense of holistic healthfulness could truly manifest itself with an “inner glow” (or so people started telling me when they looked at my suddenly acne-free skin), I decided it was time to give beauty another chance. Or at the very least redefine it.

The natural deodorant was, however, like bringing in a machine gun in my thus-far established arsenal of snowballs (glittery and innocent, yes, until they’re densely packed and thrown by a certain former-pro-athlete dad). I knew all about the benefits of aluminum-free formulas like this one; all about the additional benefits of clay in absorbing and detoxifying skin along with so many other things. I knew that in using this product instead of the Dove stick currently in my vanity, I’d be lowering my long-term risk of (perhaps) developing conditions like cancer and Alzheimer’s, and that I’d be supporting a more sustainable, cruelty-free, and locally-grown small business. And yet, the one thing that was stopping me wasn’t anything to do with the product itself, but rather the area of my body it was supposed to improve: my armpits.

Raise your hand if you can honestly say you like your armpits. Anyone? Affirmatively answering that question requires an action that demonstrates its truth, for it lays bare the near-forbidden territory that women are taught to tame and shame from a young age, along with many other parts of ourselves. I for one wouldn’t have been able to raise my hand until recently, because up until that Blissoma arrived I’d done everything I could to keep my armpits hidden, to keep my hands and arms down and firmly stuck to my sides. Early puberty didn’t make me any more loving toward this infamous region, for way before any of my friends had to I worried about white marks on the bottom hems of my tee-shirts and, even worse, dark marks that would reveal themselves if I lifted my arms in any kind of heat. I tested out new razor blades on them and felt the burn of their depilation, and the more intense burn when I slathered them with deodorant every morning, hoping it’d last me through school all day and two-plus hours of dance class in the evenings.

No wonder why I couldn’t bother investing in special deodorant that would glorify this loathsome part of me. My armpits didn’t deserve this luxury, no matter how good it was for the earth or my insides. So the sample sat in the back of my vanity for a month, until I got another deodorant sample—this time a clay-colored cream in a small clear jar. Into the stash it went. The next month’s box delivered yet another sample, this time a cream wrapped in a floral-printed label as if to say USE ME.

Clearly the universe was sending me a big sign, one I had to hold high above my head, arms raised and pits smiling out into the world. I decided to start with the stick—baby steps—and found it was faithful to its scentless claims on its own and rendering me scentless (I was never a heavy or particularly smelly sweater, but a girl can never bee too cautious…); nor did it threaten to leave a white mark on my clothing. It lasted through humid walks in the city and steamy yoga classes. I thought about my armpits a little more in that I felt good they were absorbing something natural now instead of aluminum—and whenever I felt the literal sting of failing to heed the instructions and applying it right after shaving.

My real armpit-awakening didn’t come until after that gateway stick ran out, though, and I was on to the next samples: the cream varieties. These were a whole different ball game. I’d have to not only touch my armpits—ewwww—but actually rub this product into them with my fingers—the fingers that would otherwise touch my face and bring food into my mouth. During those Blissoma months I dreaded having to face these samples, but I reassured myself that they held relatively little product, so the torture would only be temporary.

The first time I used Routine’s De-Odor-Cream in Sexy Sadie (hard to say no to that name, or the pink birdie on the label), I had recently shifted to a morning-shower routine. I opened the small tub, sniffed the slightly gritty, taupe putty, and swiped a bit onto my finger. With eyes shut tight, I raised my arm and applied; then I did the other side. I found, naturally, that there was absolutely nothing gross about it. My armpit skin didn’t reveal itself to be covered in slime or scales or spikes. It was, having just been washed in the shower, no dirtier than the skin on my hands that touched subway poles and passed-around money, or on my feet that schlepped around New York City all day—skin I lovingly rubbed lotion into during the day and each night. With the deodorant absorbed fully into my skin, the coconut oil base making it glide on effortlessly, it was no longer something I applied—like a shield. It was part of me, a me that included my armpits as valid and worthy of attention and love. 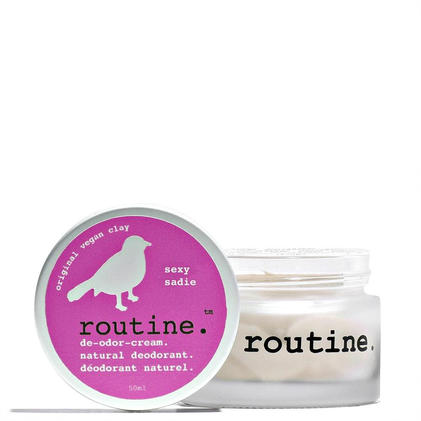 As I made my way through the Routine sample, and onto the Meow Meow Tweet Baking Soda-Free sample (more excellent naming here; this brand name alone is enough to cause swooning and giggles), I knew I was hooked. 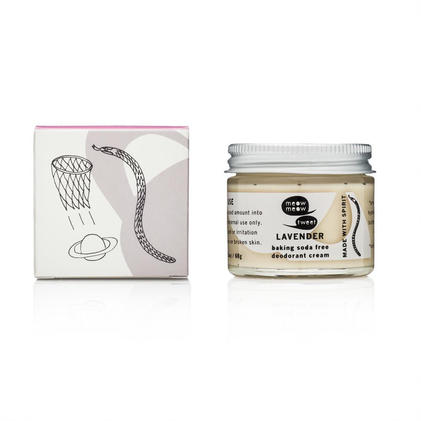 Applying deodorant became as important a part of my beauty regimen as using body lotion or face serum. It took on the sacred, ritualistic quality of the Ayurvedic self-massage practice, abhyanga, which means “self-love” or “glowing body.” And although it didn’t show too overtly, in my face or hair or outfit, that sweat-free, odor-free glow seemed to shine the brightest, and most confidently, of all. 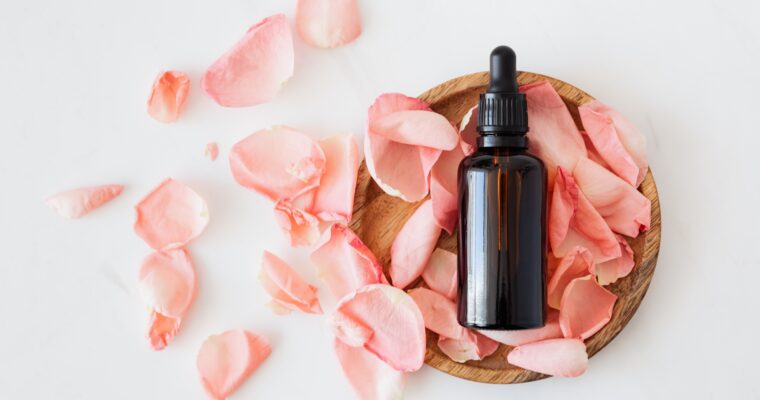 How to Do Abhyanga, or Ayurvedic Self-Massage with Oil: Self-Healing through Touch

Note: This post contains affiliate links. There’s nothing like a hug from a loved one (human or animal) to settle the body and mind in times of distress. Hugs are powerful medicine for a host of reasons, but in Ayurveda we also look at the […] 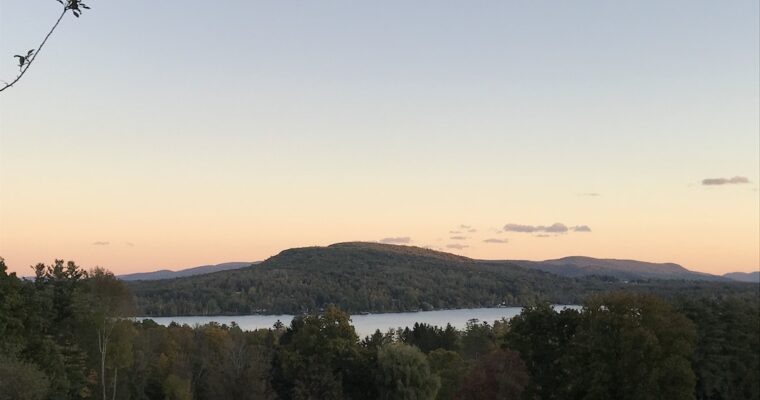 Dinacharya, or the Daily Routine

While I have many salient memories of my childhood, I don’t remember much about how I spent my mornings. The space between my opening my eyes and arriving at school (which commenced at the horrifyingly early time of 7:26 AM, my adult self now realizes […]

Ayurveda, Writing
"I pledge my life and honor…": How It Feels to Find Your Tribe
The Mirror Has Two Faces