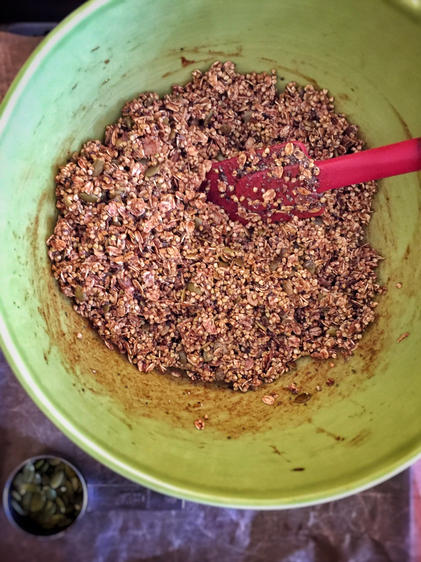 Following instructions puts me on my A-game. Give me a box of Ikea component parts, a tiny wrench, and a word-less assembly guide, and I’ll be in my happy place for the next seven hours. The exception is cooking. Although I identify as both a baker and a cook, the rule that bakers are more precise doesn’t apply with regards to most food that finds its way from my hands to my plate. I do rely on a handful of tried-and-true favorite recipes, that I read from in intense admiration from splattered and stained cookbooks. And of course I’m not about to “change up” a cake recipe by throwing in an extra half-cup of flour or leaving out spices or baking soda because I feel like it; that’s just self-sabotage. I want my food to taste good, which involves a degree of being “accurate” in terms of flavor and consistency and general look.

But the kitchen is also one of the places in my life where I truly enter a flow state. A little bit of this, a little bit of that, and a deep bass instrumental playlist, and my mind and world relaxes. There’s a very real correlation between my food flow and generally feeling stressed and overwhelmed by life.  The two are locked in a negative feedback loop of stress–>short on time–>not cooking–>stress. You may be able to substitute “not cooking” in this equation for your own flow-jam; maybe it’s knitting or making collages or running.

Last week I found myself hopelessly tangled in this flow-less loop. I was eating such random things at random times I was usually either starving to the point of dizziness or so full from poor food combinations (let alone completely unconscious of how much money I was spending) that I’d resolve to eat less the next day, adding yet another kink to the loop. So once things calmed down in my schedule at the end of the week, I was able to carve out the ten minutes I need to make a proper grocery list, and then spend a luxurious half hour idling through the store when it was relatively empty, enjoying the feeling of filling my basket with all the things I’d been telling myself I was too busy to fulfill the need for otherwise. I had a whole day ahead where I could be home and cook everything and anything I wanted.

The day started well with a recipe that to me embodies the baker-chef conundrum: granola. It’s clear to anyone who’s ever made it that there’s a lot of science behind the dry-wet ratios, and then there’s the spice and sweetener combinations. On the flip side, there’s about a million permeations of ingredients, so finding a balance between precision and creativity is hard. Having made granola countless times before (and learned from the best in the business), I started out with an ad-libbed recipe that I must say was pretty good when I “tasted” a few-too-many spoonfuls during the mixing stage, right out of the bowl.

After that, the unpredictable side of relying on flow kicked in—or rather, kicked me in the butt. When I checked the granola at 20 minutes, it still seemed a little undone. I added another ten, went about cleaning up, and when the timer buzzed opened the oven to discover with horror that the nearly-crisped, excitingly textured baking sheet I just saw was blackened. I spun up some impressive, believable yarns of justification—it’s the chia seeds and cacao powder that did it, that’s all—until I tasted it.

Another food writer may not so readily admit such failure, let alone put said failed recipe up on the internet in all its burnt glory. But I decided to write about it because it was a small yet important answer to bigger questions I’ve been working through about how and why I seek the elusive happiness and balance we all want. All told, this scenario brought together the two extremes of my continuous fight to control, and fear of its lack. I felt unhinged when I wasn’t in control of my time during the week, which resulted in an overly effort-ful regaining of what I thought was control. But even when I had all the ingredients I thought I wanted, combined them and watched them cook in the way I predicted they’d turn out best, I was wrong. The results of my efforts weren’t anything like I expected and yet . . . I was okay. I felt so great while I was in the flow of my cooking, so what did it matter if things got a little crispier than normal? I could accept the outcome and move on—noting to self to be mindful of the timer next batch—or cry over burnt granola. I could fight to unsuccessfully change what happened, or I could release that desperate hold and just add a bit more milk, even the spilled kind, to my breakfast bowl and smile.

Last week wasn’t off just in terms of my cooking flow, but also for my writing flow. I missed a blog post—the first week since I started this in January—and was feeling really guilty for being so irresponsible and lazy. I was smarter there, though, because instead of fighting as my impulse said to—staying up late to write, coming up with some sub-par post and letting another priority fall by the wayside—I let it go. So now you reap the fruits of my failures with two recipes for the price of one: the granola that will come out well, or not, depending on how much you want to fight the oven gods’ decree, and a food-flow success loosely modeled after a menu item at Peacefood Cafe. You’re welcome. 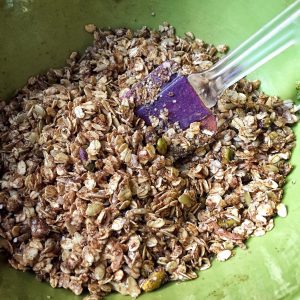