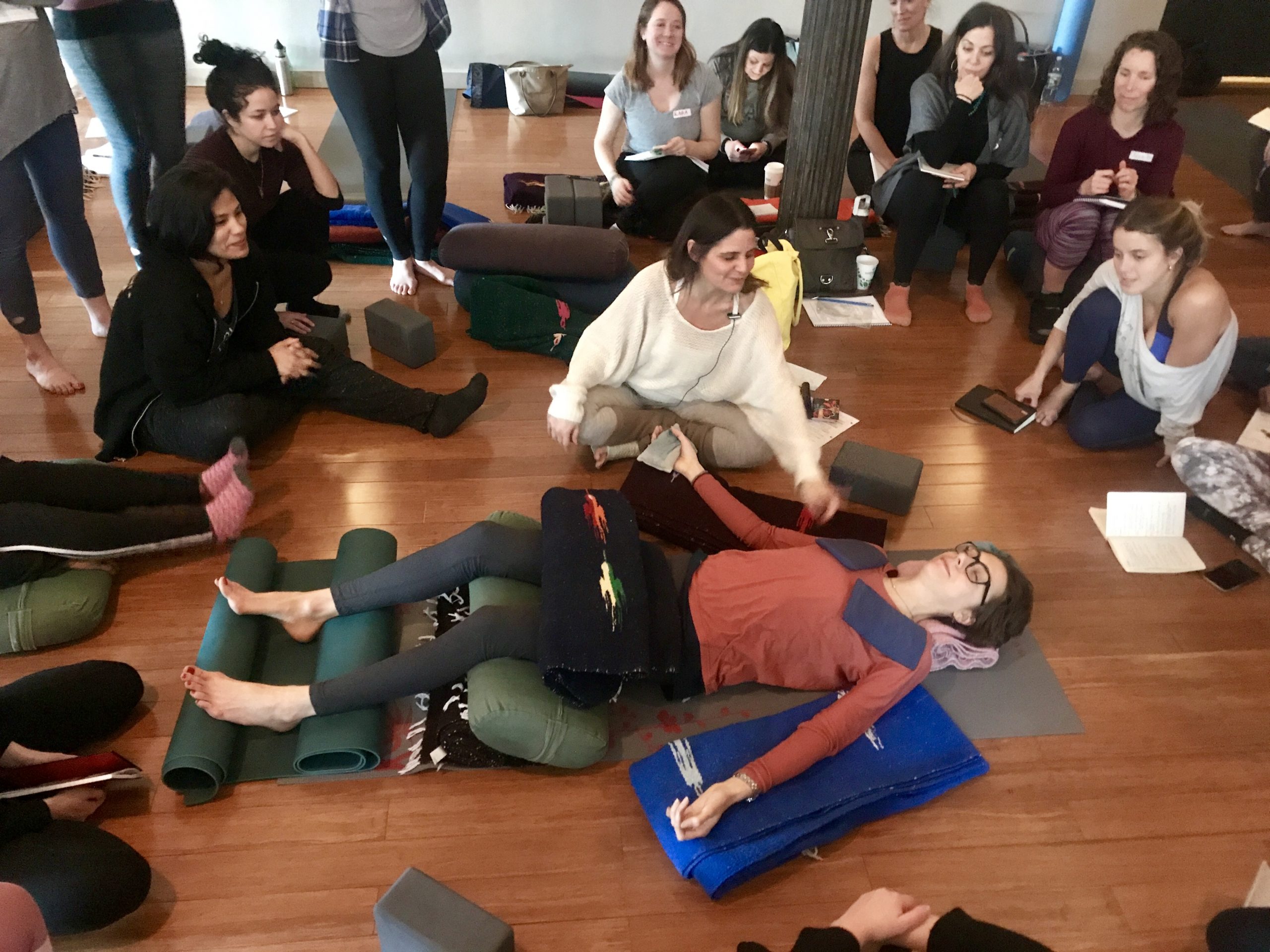 “Why should you want to exclude any anxiety, any grief, any melancholy from your life, since you do not know what it is that these conditions are accomplishing in you?” —Rainer Maria Rilke

The memory of waking up on summer mornings as a kid has taken on a few distinguishing features—the aroma of fresh coffee and pancakes, a meal we only had when my aunt or uncle was staying overnight; the itchy-tired hangover following a day of too much sun and chlorine; and the sight of my mom diligently watching Denise Austin’s Hawaii-based workout videos in the living room. Eyes gluey with sleep, I’d stagger toward the couch and soften into her—my head on her lap, her arm draped over my side—while Denise, donning her coordinated Spandex, toned and tucked and shaped herself like the chiseled mountains in the background. Abducting the leg until it felt like cement would make a “sexy” divot in the side of the hip, she taught me, in addition to the implication that a flat, toned abdomen would put as big a smile on my face as was on hers.

As I entered my teens, summer was less of a time for softening as it was for productivity. Gaining points on my life resume with volunteering, reading every book I could get my hands on to be prepared for classes in the fall, and actually doing some of those Denise Austin workouts rather than just watching them. Her routines became so familiar that I needed to diversify after a few weeks, and Amazon lead me to discover CorePower Yoga DVDs. When the package arrived, I unwrapped the case, giddy with the expectation that I’d soon become as toned, devoted, and smiley as the woman on the cover. But about 40 minutes in, I found myself scowling, laying on my back in what I immediately decided was an even bigger waste of time than watching the videos on the couch: constructive rest pose.

Knees bent, feet on the floor, fighting the cue to breathe deeply into the belly—I was feeling anything but restful, in fact furious with the makers of the DVD and wondering if I could somehow return it after opening the cellophane. The longer we held it—three, then five, then ten minutes—the more I was convinced I’d been coned. There was nothing resembling “corepower” in this pose. Rest was not constructive in my world; rather, it was excessive, indulgent, and unproductive. Hard work was what I needed to do to be healthier or happier, not rest. I needed to suck in my belly, as I’d been doing since I was eight; I needed to contract to achieve a sliver-like profile that was both desirable and a sign of my dogged willpower and control.

Simply recalling this experience is enough to elicit a visceral reaction in my body, even as I sit miles and years away from where I felt the acute discomfort of rest. The gripping in my psoas and belly as I tried to sneak in some kind of effort (could I do invisible micro-crunches, or glute-squeezes, without anyone seeing?) during this stupid reprieve; the heat rising into my face and periphery, making my small ears purple with fight-or-flight fuel. My sympathetic nervous system was loading my tissues, setting off a chain of chemical reactions that would shut down all systems of healing and maintenance, and cementing a story of anxiety that would become lodged in my body the way I hoped that sexy hip-divot would.

Although I didn’t know it at the time, I was doing a lot of work in constructive rest—just not the kind that would serve me in the long- or short-term. I wouldn’t come to realize until much later that the stress I put on myself to constantly fight relaxation, in constructive rest and in life, was shaping my physical and spiritual body into a suit of armor. Every time I turned on that DVD, sat in front of my computer, or had a conversation with a friend or colleague about how we were not getting ahead in our lives and careers fast enough, I trained myself to become more rigid and unyielding to the eruptions of being human. There was less and less time for lazy summer mornings, less time to receive the warm touch of a loved one, and less space for the nourishing breath I needed to expand my recoiling belly.

There are so many ways that we can stress the body—each time we lift something heavy, extend or flex a joint, or elongate a muscle, we’re triggering a transformation within the very fibers of who we are. We seek this out in exercise classes—as one of my instructors likes to charmingly say, “Exercise is just an insult to the body”—and hopefully learn ways to safely and effectively increase that stress to reach health and fitness goals. The stress teaches us that with intention we can change and adapt to different external and internal loads—it’s literally constructive, refining the scaffolding of the body to become more resilient to the volatile conditions of being alive.

This is the kind of stress that tattooed a smile on Denise Austin’s face, the kind of smile I’ve worn while in the joyful, exuberant flow of dancing and practicing asana. We build muscle and tone in constructive stress, yes, but we also build up our reserves of prana. Breathing deeply with movement connects us to the breath of the universe around us, making us more whole outside and inside. From states of constructive stress, we evolve separately and together.

Unfortunately, so many of us have become disillusioned into thinking that walking around in bodies and minds of any and all stress, all day and night is even more constructive. Work harder, evolve faster is the message on almost every high school and college diploma, resulting in a world where we no longer trust ourselves enough to soften into ourselves, let alone each other. As a yoga teacher, I’ve seen students roll up their mats as I cue the class into savasana—and admittedly was one of those students in my early days. If they’re courteous enough to stay to the end, others might try to fit in one more wheel pose or headstand, perhaps believing that as the rest of the students close their eyes somehow no one would see them ignoring instruction. Like my younger self, we are ignorant of the truth that there cannot be constructive stress without constructive rest—anatomically and energetically.

In the space of constructive rest, we’re actively participating in our own self-healing. We repair the micro-tears of the kettlebell or frustrating email exchange; we let ourselves pause between who we were and who we are becoming. It’s the less that allows us to do more with our effort, our awareness, and our hearts.

Thanks to constructive rest, there’s nothing about stress these days that doesn’t feel constructive to some degree. I’ve learned to embrace what is ultimately an impermanent state of surrender. The time there feels precious, vibrating with stored up, transformative potential energy without which there could be no before or after. It’s my home base: sometimes as a first pose, a transition between outside life and the sacred space of my mat; an imaginary tent where I can allow my hands to embrace the contour of breath in my belly; a shape of permission, allowing for what needs to be here and now.

In this pose, the stress of holding onto a certain image of myself dissolves. I’m back in my summer-morning body, not being watched from the outside like Denise but instead watching what’s going on inside. The workout I get here is far more intense than that from any DVD I’ve owned, and each time I think I get the form right for “maximum benefits” a new note of discomfort—a twinge in my hip, a frustrating text, a delayed subway ride—rises to the surface. In these moments of intensity, I no longer aspire to carve divots in myself, nor don a suit of inner armor to keep out the discomfort. I let all the feelings crawl inside and snuggle up beside my heart. I stroke their sides, and gently drape them with a soft, full belly breath whispering, “It’s okay, I’ve got you.” From that place, all the loads of life lighten into shimmering beingness, leaving behind the most constructive work of all: rest.