How to Be Enlightened: The Nonduality of Catholicism and Yoga 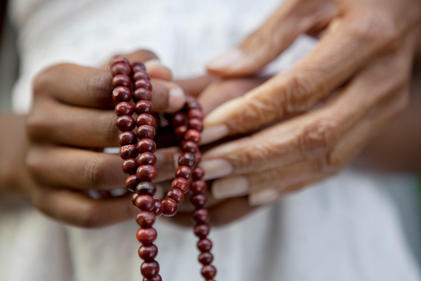 Lokah samastah sukhino bhavantu…. I sit on my yoga mat, ankles crossed in a Half Lotus pose, eyes closed and struggling to form the shape of these foreign sounds in my mouth. Horns blare and headlights shine dimly through the gossamer-curtained window—the thinnest of veils separates us from ever-bustling New York City. My teacher is inviting us to join her in this ancient Sanskrit chant that translates to “may all beings everywhere be happy and free.”

For several weeks understanding the phonetics of this phrase had been about as challenging as executing a headstand. Tonight I finally I get the hang of it, and the sounds float as freely from my throat—from my heart—as does the unifying sound of Om that started and ended our practice (and even harmonized, strangely, with all the honking). My teachers had always referred to these chanting rituals as “sacred.” That description never made sense until the phrases resonated in me like other melodies—the songs I sang in Mass every week; songs that somehow seemed to be the same in churches I attended growing up in East Brunswick, N.J., then during college in Cambridge, Mass., and now in the mecca of ambition and drive, New York City. Had yoga, and the Eastern religions behind it, somehow become sacred to me, a practicing Catholic?

What drew me to yoga was something admittedly unphilosophical. I desperately needed a place where quiet and relaxation was encouraged. Something major was misaligned in my life. I had relied on my faith to get me through the very trying moments in my teens and early 20s marked by loss and illness. For all those years I attended Mass regularly, and in the familiar words of prayers and songs I found not answers to my questions and doubts but reassurance. 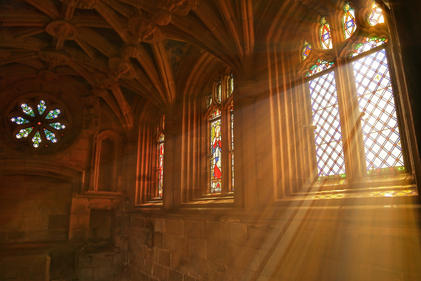 The effect was similar the first time I rolled out my yoga mat. For several weeks my mind would stay occupied by sorting out where to put my arms and legs as the teacher called out postures with animal and plant names (Bird of Paradise, Frog, Crow, Lotus, just to name a few); I felt self-conscious of my decidedly not-cool yoga clothes; and I tried to remember who the sweatiest people in class were so I could avoid getting sprayed in Downward Facing Dog. And yet for all those distractions, I was undeniably at ease there. In the dark room with soothing, repetitive music, the anxieties of my day and my body melted away.

Studying yoga more, however, I learned about the philosophy underlying the practice I was undertaking every week. Patanjali’s Yoga Sutras, the veritable yoga bible, is a tome of 196 strung-together adages that, in ancient India, a yoga student would learn orally through study with a master: the keys to enlightenment through living the practice of yoga. Divided into four “Padas,” or “feet” (thusly called because a student would learn them while walking with his teacher), the sutras outline the different steps an aspiring yogi takes to transform from a small-s self, who identifies with his external nature, into a Seer.

This authentic, capital-s Self has successfully moved away from the external world and relationships with people, things and ideas, thereby becoming attuned to his true nature in a state of enlightenment, or Samadhi. The steps to this state are both concrete and frustratingly abstract, ranging from how to make one’s seat (“steady and comfortable”) to how to obtain happiness (“from contentment, the highest happiness is attained”). This new knowledge illuminated a fact even more fundamentally odd to me: namely the connection between Patanjali, a Hindu sage, and Jesus, the Son of God.

There are, of course, fundamental ideological differences between Hinduism and Christianity. The Hindu religion is a variety of polytheism wherein gods are everywhere, intervening at will in humans’ lives, and reincarnation is an accepted truth. Christian monotheism offers a different kind of God, who created the world and then allowed man to act out of his free will. Only through living a virtuous and compassionate life does the promise of eternal salvation, thanks to Jesus’ sacrifice, enter the picture. With such different underpinnings, how could prophets of each have such a similar focus? I wondered. Then I considered their motives.

Patanjali was not just writing the original self-help book; he was acting upon a divine calling to eradicate suffering from the world, which he saw as the primary affliction of his people during his time. The first four sutras are very explicit about this intention, explaining that “Yoga is the stilling of the changing states of the mind.” Only in doing so can one “abide in [one’s] own true nature.” In other words, when we strongly latch onto the things that preoccupy us about the world, including our external identifiers like our jobs, where we live, our gender, marital status, favorite color, etc., we are not in our true nature. Patanjali’s desire to help people save themselves from the danger of distraction of the material world intersects powerfully with the message of Jesus. “If you want to be perfect,” Jesus says to the rich man, “go and sell all your possessions and give the money to the poor, and you will have treasure in heaven.”

I have always been open-minded and accepting of all faiths. I did not, however, feel any need to replace or supplement my Catholicism with something else, no matter how pretty the chants were or how much I agreed with the teachings. I thought of yoga as a physical exercise—one that I could abide by in a general sense, by turning off my social media feeds and pushing my to-do lists aside in an effort to be “present.” But grappling with how the religious underpinnings of Catholicism and yoga could be the same—that was territory I did not yet have the muscle to traverse. And so I prayed and flowed as two selves, attending Mass on Sunday mornings at 8:30 and vinyasa class at 10:45, relishing in the benefits that each gave me on its own terms.

But together these two ways, of Christ and Patanjali, have helped me be more at peace and be kinder to myself. Although I am still on the path of discovering what I am called to do, my vision is clearing; my will to help heal people through yoga and other creative outlets is manifesting. In allowing the rivers of their words to merge, both yoga and Catholicism, I felt doubly guided along my true path—toward the ultimate grace they both posited as the result of that arduous work of faith and discernment, of compassion and joy.

Ayurveda, Writing
On a Clear Autumn Day: Seeing the Sat in Satire
A Call to Compassion