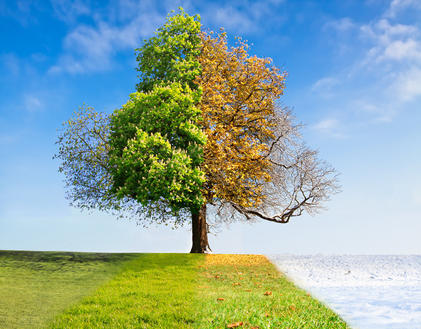 Whether it’s fear/frustration over the temperature, the selection of vegetables on our dinner plates, or the style and color of the shoes we wear, seasonality has become a primary gauge of worth in our culture. Valiant attempts to abate climate change, or at the very least to be “cool,” have made cooperating with nature in all aspects of our lives something more of the norm than the exception. Adding to this motivation is the way our wholly unnatural way of live-working—24/7 access to the people who need us and whom we need—has caused a crisis of dis-ease, a craving to reset our internal clocks to the rhythms of the world versus the world wide web to achieve a baseline of physical and mental health.

Being “in season,” however you interpret it, opens wide the doors to opportunity because it’s predicated on an acceptance of flux. The seasons stand out only in relation to one another, and to appreciate the qualities of one requires an appreciation of its opposite by negation; I look forward to the brisk winds of fall because the humidity of summer kills me, but without that heat autumn would turn into a complacency. This is the ying-yang codependence that keeps the dark from extinguishing the light, or light from burning out dark. The recurrence of each season also allows for a sense of growth despite similar external circumstances. Maybe you get excited for the summertime kale crop, but last year’s greens won’t be the same as this year’s, and maybe the intervening months have turned you onto topping salads with straight-up tahini instead of hummus. The same is different, exciting, ironically fresh in its familiarity.

As someone who refuses to contemplate living in a place without distinctive climate seasons, watching the weather blend into an erratic gray area of anything-goes is particularly upsetting to me. I appreciate the gradual changes, how just when you get so into a certain set of seasonal habits you’re tired of them it’s time for something new. Such a change manifested when the recent and sudden heat wave that blasted New York City with 80-plus-degree temps (in early May, after a March with four blizzards), sent me looking to the far end of my closet for summer-like clothes I could wear without being too depressed. Last week I was still wrapping up in a scarf and gloves, so to be going out with bare legs and no coat was a bit of shock to my system. Until I saw my favorite dress, the memory of which had been buried under the snow-mound of woolens I’d rotated through more times than I cared for since October. I could feel its soft drape on my skin, the way it made me feel effortlessly simple yet self-aware. It seemed I was more in need of a change than I thought—the kind that reminds us of parts of ourselves that had to be put into the dark parts of our closets until the light shifted to reveal their necessity again.

Putting the dress on pressed play on a wholly unexpected narrative, though. It felt completely wrong—heavy, misshapen, unflattering. Nothing about my physical body was different from last year that would have resulted in a fit change. I was flummoxed, and for the few hours I wore it I was miserable. If I couldn’t even rely on this dress to persevere through non-seasons, such as they were, then what could I rely on? And more importantly, what would I now be able to wear if I’m trying to not buy new things? Last year I wore this dress at least once a week, and finding something equally translatable to different wardrobe contexts would be a challenge.

As my mind ran around in circles doubting the sanctity of seasons, the still point of a deeper, even more poignantly evolving change became apparent. This dress was the same, I was the same, and yet they didn’t align anymore despite the arrival of the common ground between them—the season. Since I can’t reasonably say that anything intrinsic about the dress changed (I’ve only had very few embarrassing moments of anthropomorphizing clothing, and this wasn’t one of them), it must of have been me. I had entered another season of life that was highlighted by the environment, yet had happened in its own time. The fulcrum of my experience of myself in the world had shifted, drawing into question whether this was actually change or a deeper manifestation of an unchangeable inner essence.

Yoga philosophy characterizes this brain-teasing irony as the principle of nonduality, the inextricable way that we are bound to the changing world around us and yet fixed in a true nature. Ayurveda makes the seasonal self even more explicit, assigning each dosha a respective time of year in which it thrives and around which our health is constantly being recalibrated (cold, dry vata is autumn; cold, damp kapha is winter, the warm, dry pitta are spring and summer). When I first encountered these sister practices, I was frustrated by their apparent illogic (at least by Western standards). If there is some greater Self sitting in my core, then why do I need to work so hard to get there?

Reexamining my dress fiasco offered a kind of answer in radically simplified terms. First of all, it was far too early to have to be wearing it at all, lessening the welcome feeling of joy I’d expect to feel more readily in June or July. But more importantly, the piece clearly wasn’t something that sufficiently reflected the inner essence of me I wanted to be reminded of in wearing it. Plain, malleable, and flattening, it allowed the needs of the external season to swallow the needs of my internal season. Whereas I thought its anonymizing effect would help it carry over through many seasons of my life, it was instead a false representation of my true Style—the wardrobe of my capitalized, unchangeable Self. Unlike the truly perfect minimalist-staple items in my closet, this dress hadn’t been able to adapt. It kept me in the impermanent conditions of one summer, rather than highlighting who I was and will be in all the summers of life.

To me, being truly in-season doesn’t necessarily require a major turn-over of clothes and foodstuffs, even when doing so puts us in greater harmony with the earth. The earth is actually pleading with us to slow down the cycles of burnout that require turn-overs of life, to regain hold of our center so the pace of change can return to normal. We need to be able to enjoy the cropped pants and lightweight layers of our wardrobe before jumping from gloves to sundresses. If not, the season of the Self will never have space to be sown and bear fruit in its own time. Summer may mean nothing without the winter that preceded it, but summer means even more nothing without each of our unique selves to experience it. Like the dress that emerges dull and dumpy from hibernation, or the kale that wilts in the vacillation of frost and heat, the Self needs a kind of change that is unchanging—the change that doesn’t shock but maintains, that doesn’t treat but nourishes.

A Call to Compassion

Normally I’m not a frequent visitor of Twitter, but I happened to be on the morning of October 24 when the following popped up in my newsfeed: Compassion brings inner peace and whatever else is going on, that peace of mind allows us to see […] 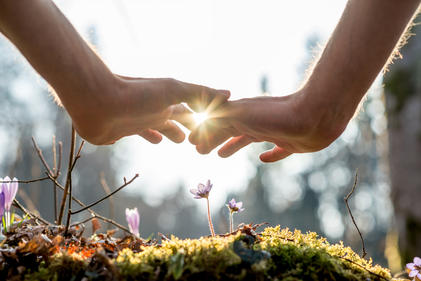 Feeling unwell often results in a sense of desperation. For myself, I know that my typically regimented and disciplined set of routines falls apart when my body and mind aren’t speaking the same language; in an attempt to feel better, I’m prone to making hasty […]

Writing
The Year of No New Things
A Nourished Mission