Me v. Running: The End of An Affair 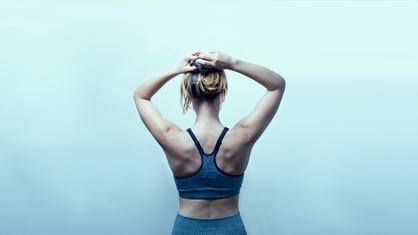 It started Memorial Day weekend. I was days away from completing my 5-month-long, 200-hour yoga teacher training program and, honestly, was in the best shape of my life. My limbs were sculpted in the long, lean, cliche-yogi way now ubiquitously <3’d on Instagram, I had endless amounts of energy, and I felt great about my body—more so than when I was in my peak dancing period, and certainly more so than when I was at my lowest weight. One night, I met a friend for dinner who had a few months prior left his painfully abusive and soul-crushing job, and when I asked if his glowing smile and overall lighter demeanor was from the enormous freedom he’d found, he told me yes, but also from his new daily exercise routine. In the state I was in—hungry for more activity and high on sattvic endorphins—that sounded like something I should totally try, too. So I upped my own ante and added another batch of cardio to my weekly workout cycle. But instead of the fast walking I’d always done, due to knee injuries, I decided running would be even better.

My yoga training had corrected so much of my emotional and physical misalignments that the first day I picked up my walking pace into a jog, I was pleasantly surprised to find I got home without feeling like I would need a wheelchair to get around the rest of the day (that’s how badly my hyperextended knees had weakened my ligaments, and prevented me from running in the past). Over the course of several weeks, I increased the number of “legs” of my walking route that I ran instead of walked. Soon I was up to a 4:5 ratio running to walking, completing a 5-mile loop in just around 50 minutes. By now it was the height of August, and while part of me dreaded coming home drenched in the mornings, and having to shower in my un-air-conditioned apartment before work only to emerge still quite damp, the other part of me loved it. Craved it, even. My sore legs and feet told me I was getting stronger—better. I was convinced this was good for me and satisfied something my body had been deprived of for years.

I’m not saying now, as I write on a gloriously spring-like day in February that would have been perfect for a long run sans triple-layers of heat-trapping gear, that I was completely blinded by my new exercise-lover. My impulse to balance the strengthening work of my yoga practice with cardio was a good one, especially since the cardiovascular benefits of even the most intense styles of vinyasa and power yoga are up for debate. And in general, for people who have sedentary desk jobs like myself (I read for a living, basically the antithesis to physical activity) it’s important to get a solid amount of cardio exercise for overall health. During this time in my life, too, I was embarking upon an ongoing journey of deep soul-searching (even though I didn’t always know it), and the intensity of the exercise helped to fire up the passion and ambition to change things that I had long repressed. In yoga, we call this energy tapas—the fiery heat and discipline that purifies the yogi as she moves toward enlightenment. On a physical level, I was doing that, too: sweating out the bad, as Bikram yogis like to say, and starting to move away from a situation I didn’t like to one I might like more—as fast as I could.

But as the yoga sutras teach us, along with many a Lifetime movie, what we can get out of so-good-they’re-bad-intense relationships is separated from pain and suffering by a very thin and permeable border. In the humid summer months as I ran and ran and ran, every day without pause, I began to tax my body in a way that I couldn’t distinguish right away as more harmful than helpful. Muscles started to strain, affecting my daily life and my yoga practice—inhibiting the flexibility I’d worked for my whole life as a dancer, and was extremely proud of; my energy dipped instead of maintaining its high plateau; the feeling I had toward the end of a run changed from wishing I had a bit farther to go to wishing I could go faster just so it would be over. The honeymoon period of my affair with running was over, but I wasn’t quite ready to let it go.

This past week, having recovered from the fifth successive minor injury I’ve had since September, I decided it was time to break it off—and not in the Ross-and-Rachel way. I came back from my run Wednesday morning, stressing over what could have caused the sharp pain in my outer knee and ankle—the latest fun new ailment I knew I’d Web Md myself into a frenzy over shortly. When my next scheduled cardio day came up yesterday morning, I woke up and told myself “You have so many other things upsetting you right now, Jennifer. Why would you cause yourself pain on top of that when you don’t have to—at all?” Instead, I laced up my sneakers and disciplined myself in a new way: to keep to a steady, brisk walking pace that had been a good, reliable partner for so long. And when I got home, nothing hurt.

It’s important to tap into tapas every now and again, otherwise we risk falling into complacency or lethargy that could apply to any area of our lives—health, work, relationships, and self-care. But it’s equally important to step out of intensity and see through the flames to the clear, illuminated vision on other side of our efforts. Not everything is a race, and racing for its own sake without purpose is as fruitless as standing still without presence. What my affair with running taught me was that it’s okay to have limits in life and respect them as much as my ambitions to do more. When the latter began to outweigh the former, I was prevented from doing either effectively. At the same time, I know this period was an important one for me to go through, because now I have even greater respect for the ways my body was—is—able to heal from what I put it through. And it forgave me each time I pushed it too hard, which is not something I always allow of myself.

I’m reminded of a poem by Hafiz that speaks to this tendency to push until we break; the way that the enlightened among us help us come back to a true home; and how that outsider’s perspective can help us allow ourselves to save the energy we use to fight internally for more important missions, no shortage of which we have today.

Now is the time.

Now is the time to know,that everything you do is sacred.

do you throw stones at your heart?

why not consider a lasting truth with yourself?