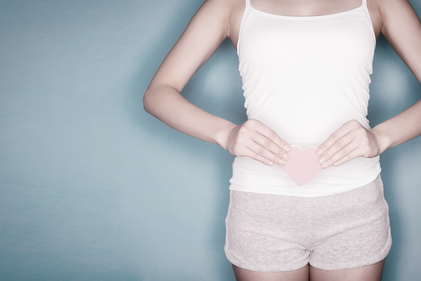 In his book Being Peace, Buddhist monk Thich Nhat-Hanh describes the right way of perceiving in the classical mediation manual for Buddhists: “The practitioner will have to contemplate body in the body, feelings in the feelings, mind in the mind, objects of mind in objects of mind.” On first read, this seems to suggest clear delineations of sources and kinds of perception; we don’t need to mix up feelings with body, or mind with objects of mind. For most of us with bodies and minds that are hopelessly (and literally) connected, though, this is far easier said than done. Especially when it comes to the former. We are taught from such an early age to identify with the body; we readily assume that all we experience is being filtered through sensory receptors, from our eyes and ears down to our pores and sensitive nerve endings. The way we dress, eat, style our hair—they’re all ways that we say to the world, “I am my body. I am what you see before you.”

While there’s nothing wrong with trying to match your external self with internal preferences or passions (like mine for the color millennial pink, or a friend’s for Liberty patterns). The trouble comes when we forget that there’s something deeper within that’s causing all those bodily responses and urges in the first place; the essence of ourselves, if you will, that manifests itself in our outward forms. In this sense, “perceiving body in the body” simply can’t be done, for body doesn’t exist on its own. Indeed, Thich Nhat-Hanh elaborates: “Contemplating body in the body means that you should not look on your body as the object of your contemplation. You have to be one with it.”

Being your body is different from identifying with your body, a very subtle distinction I feel an urgent need to unpack because of a chronic perception I’ve had in—guess where?—my body. As has been written about in spiritual and medical texts alike, there is a strong connection between one’s gut and emotions, and frequently stress will manifest in upset tummies of all shapes, sizes, and gurgling noises. For the past 10 years or so, I’ve had stomach duress ranging from extreme, can’t-fall-asleep-I’m-so-uncomfortable, to minor though persistent background feelings of “something’s not right in there, but what the heck it’s Tuesday isn’t it?” Mindfulness has been a huge part of my ability to overcome these ailments, especially when I was introduced to certain pranayama (controlled breathing) exercises through yoga: namely Kapalabhati (fire breath), Bastrika (bellows breath), and deep belly breathing (’nuff said). The last is the most straightforward to access and can literally be done anywhere: you just inhale deep enough that the air goes all the way down past your belly button. Try it.

Bet you don’t normally breathe like that, do you? I certainly didn’t for a long time; my autopilot breath stayed high in my chest, my ribs barely moving as a reflection of an aversion to going that deep, to nourishing my gut with air (metaphorically and anatomically) that might stir things up in a way I assumed would be negative, but that’s actually relieving and essential to life. 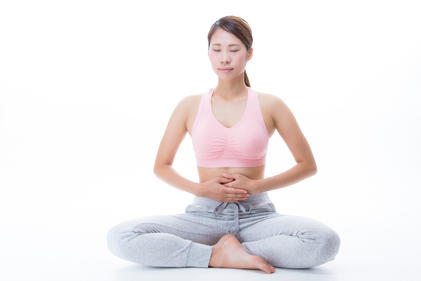 Practicing full-on belly breathing, though, usually requires placing a hand (or both) on the abdomen itself, so that you have feedback about the expansion and contraction of your diaphragm and organs as air moves in an out. It’s incredibly freeing to breathe so fully—except when it isn’t. When the thought of touching your belly turns your brain’s radio station to a commercial-free marathon of Inner Critic; when you can feel the hard, undigested toxins stagnating under the surface; when your own touch reminds you of the lack of touch you’re so used to, and makes you long for what you don’t have.

Contemplating body in the body, in this case, brings together two body parts for a synergistic explosion of non-body stuff: what rises to the surface is the stuff that we really are, but resist being truly one with. Our work is in this case, and always, a process of embodying nonduality and not just identifying with what’s underneath, what’s blocked, but not identifying at all.

Throughout her book Deep Listening, restorative and therapeutic yoga master Jillian Pransky offers several instructions that allow resistant belly breathers like me to see the non-body stuff differently and meet it with openness rather that resistance, softness rather than hardness.

Let your breath expand inside your welcoming belly.

Allow the earth to receive you.

Feel your breath with your soft hands.

The touch here is not radar for what’s wrong, but an offering of more of what’s right. It’s providing support, space, ease. It’s a two-way conduit rather than a blocked dam. When we prevent ourselves from traveling that conduit, it’s because we’re afraid of what’s on the other side. We know what we have, but what will we receive?

It’s fitting that these words pour out of me now of all times, for 1) I’ve been contemplating how to write about this for months, never truly able to commit to an approach, a focus, a metaphorical anchor, and hence side-stepped the thing all together; and 2) post-holidays I’m still suffering from one of the extreme cases of stomach duress, which makes belly breathing urgently needed but uncomfortable. My hands feel all the problems underneath first, and as if touching a hot stove they jump away out of protection.

But what if instead of fearing the fire, I knew that the breath would put it out before I got burned? What if the breath could maintain just the right degree of smolder to stoke an inner fire that’s been too long starved for air?

Exploring my belly’s enormous capacity does not mean my belly is big. It means I am big—inside—and ripe with possibilities waiting to be exhaled.

Ayurveda, Writing
A Year in Gratitude: My 7 Favorites of 2017
Blind Spot