Keep Families Together + How to Throw a VBQ 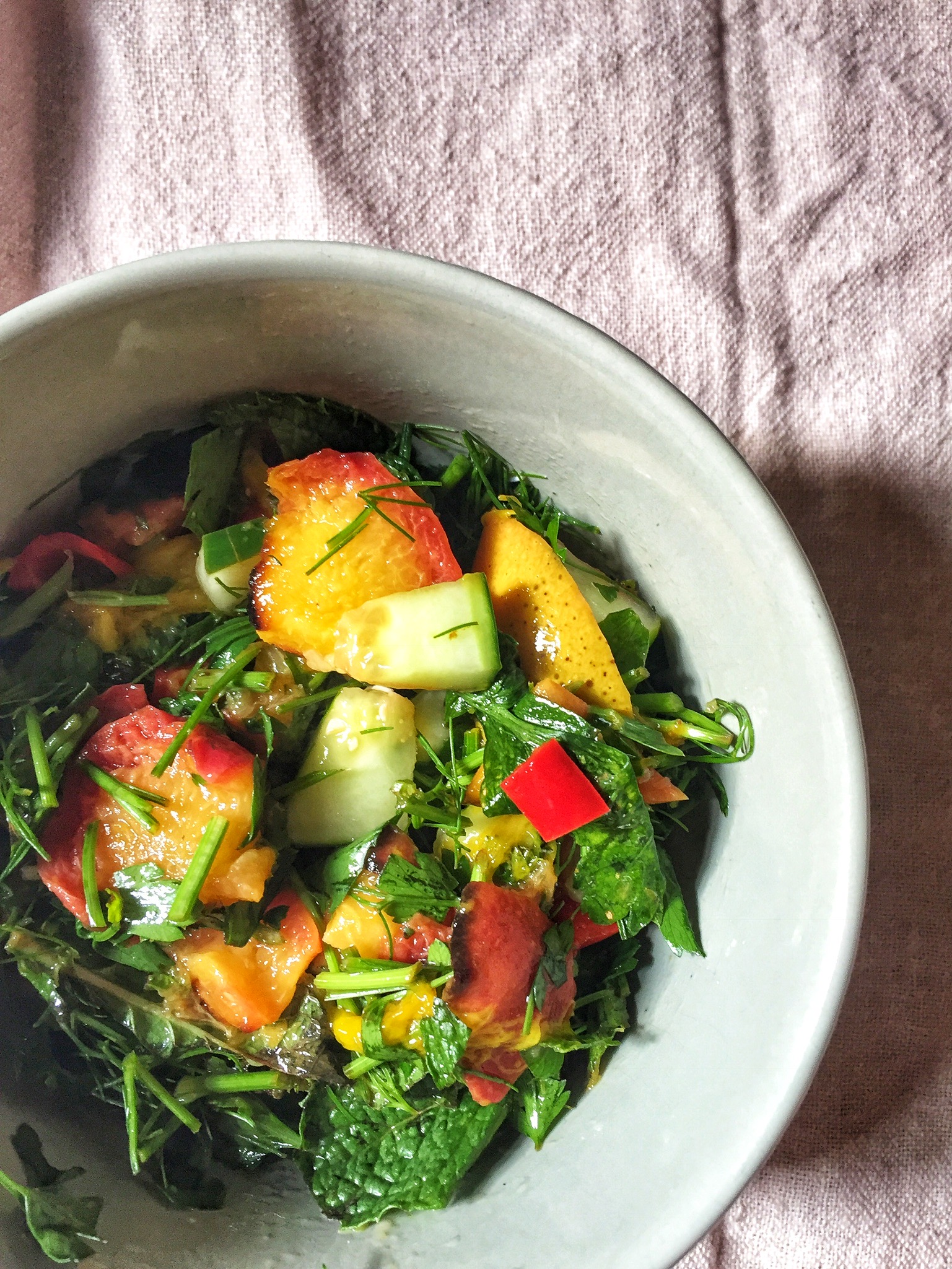 This week’s readings in the Catholic liturgy seemed to bear more poignant relevance to the current goings-on of our country than usual. The gospel told a story of Jesus’ healing a girl afflicted with hemorrhages for twelve years. Her father had beckoned Jesus to come save her, despite the elders’ arguments that she had already passed and was not worth his while.  Of course, Jesus does his thing and the girl not only is cured but rises and walks around a bit as proof;  we are left with the lesson that “faith has saved” her—and us, by virtue of being good church-going Catholics.

My priest expounded upon this during his homily to clarify that bleeding in any sense would make a person (especially women) unclean—unable to sit with her family for meals, for prayer, for anything. Hence her years of bleeding had resulted in just as much of a symbolic death—a separation from the people to whom she was connected by blood of a purer sort, it seems—as a literal one. Reuniting her with the rest of the household is as much a miracle here as is her corporeal healing, leaving them all “utterly astounded” by his works.

As I listened to this story, seated inside an air-conditioned building understood by all to be a place of unconditional sanctuary and hospitality, myself a white woman of child-bearing age with her family no more than an hour’s drive away yet willfully (in a sense) cordoned off across the river, I couldn’t help but prick up a little inside. As much faith as I put in the teachings of the Bible, faith alone seemed inadequate to solve the problems of the innocent families who were severed at the border last week. I doubted that being told to “have faith,” even from the lips of Jesus himself, would assuage the fears of the thousands of crying children and their equally distraught parents who emblazon our news cycles. The sanctuary they had sought in coming to this country was now cut through by a mote of impure blood, gushing from the hearts of those families as forcefully as a severed carotid artery.

Besides kicking up several notches my escalating incredulity about our administration’s family values, this reading cast a different kind of light on the urgency for family for me. Most females of my generation have doubtless gone through the exercise of questioning the fate of our biology; our bodies are designed to have babies, but does that mean we have to? Despite having serious problems as a grade-schooler with my catechism teacher’s lesson that we are put on this earth to reproduce (and thereby make more Jesus-followers), I never had a problem accepting my maternal instincts. My sister and I spent several summers playing baby-naming games, and even as I write this I smile imagining our hypothetical sons roughhousing her backyard (she always had a suburban McMansion with a black SUV in the driveway; I would bring my city-dwelling family to visit “the country”). A recent podcast series from Radiolab (highly recommended) also brought to the fore of my mind that our bodies are literally filled with reproductive “magic.” The female anatomy in particular is immensely magical and nuanced (like many female things), and the podcast presenter’s description of ovaries as filled with not only a woman’s children but her grandchildren and generations thereafter ad infinitum struck me as one of the most beautiful images of why we are here on this earth. My CCD teacher wasn’t far off saying that we are each alive to have children, but somehow recognizing that we each carry an infinite number of selves, past and present and future, seems more elegant.

Still, questions linger about the impact of raising children on our stressed planet, on top of the other cri de coeur I and other young women are taught these days about the ways we can “have it all.” Maybe I don’t want it all—maybe the satisfaction of living a meaningful life in work and non-work activities, with or without a romantic partner, is more realistic. Maybe I can actually choose whether my anatomy is fully utilized, just like I can choose to not arrange my limbs into yoga asanas even when they anatomically go that way.

These feminist-imbued cries of autonomy and independence were hushed, however, during these moments I sat in mass. When I closed my eyes in reflection, a reel of my Instagram feed looped—images of my friends’ pregnant bellies tagged with #KeepFamiliesTogether, women who had no qualms with using their independent, autonomous voices to stand up and march for mothers, and the children they’d borne and their children after them, who couldn’t stand for themselves. Overwhelming the organ music was the sound of babies—the handful in the church itself, whose discomfort would be instantly soothed by the parents who held them tight, but also those babies miles away who had no loving arms to hug them, no fingers to wipe their tears, no soothing voice to tell them they were loved.

If I could I would have snapped my fingers to be part of that tribe of family, or to at least know i could do something to be a parent to some child in need. To have had enough faith to prevent the breaking apart of families, since Jesus has not yet come to heal the ones now broken.

Wallowing in my childless, husbandless state was one possible reaction to this decidedly un-cheery turn Sunday had taken, but I made an effort to tell myself a different story. Because the fact is I do have a family. People who remind me of their love more than I do them, who would swim through the blood-border to get to me if they had to, who have indeed come to my physical and emotional rescue in many a dire circumstances, who wear cheesy tee-shirts at my suggestion and then pose for photographs in them. I may not have planted and sown seeds of my own, but I could more actively tend to the garden from which I myself came.

And what better way to do that than by speaking one of my favorite and fluent love languages, food? This Fourth of July might not feel especially patriotic, but I plan on celebrating family-style with the plant-based fare I put together with an extra sprinkle of love. I know that the people I’ll see tomorrow will appreciate the blood, literal sweat (the heat index today is off the charts), and tears that went into these dishes.

It’s also fun for me to unite two sides of  my family—my biological family and career family—by taking inspiration from one the cookbooks I recently published, VBQ: The Ultimate Vegan Barbecue Cookbook. My apartment-style broiler grilling isn’t quite up to the standards of Jörg and Nadine, my lovely German authors and founders of Eat This!, but I hope they’ll understand 🙂 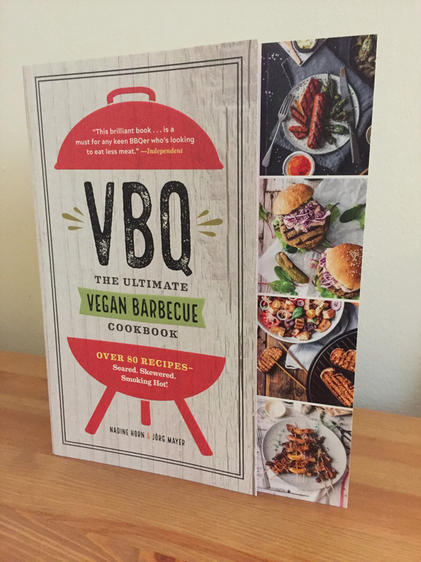 Currently in my fridge, awaiting eager devouring including by myself, are the Marinated Fennel Salad from VBQ and a new find that brought back a ton of Pop’ems nostalgia: these couldn’t-be-easier, vegan AND gluten-free No-Bake Vanilla Cake Bites from Minimalist Baker. Because I can’t simply follow a recipe, I adjusted the spices in both, with a bit more cumin in the fennel and a lot more cinnamon in the bites. Partly out of laziness and partly out of preference, I also experimented with a hybrid of fruit-based salsas from VBQ (recipe below). 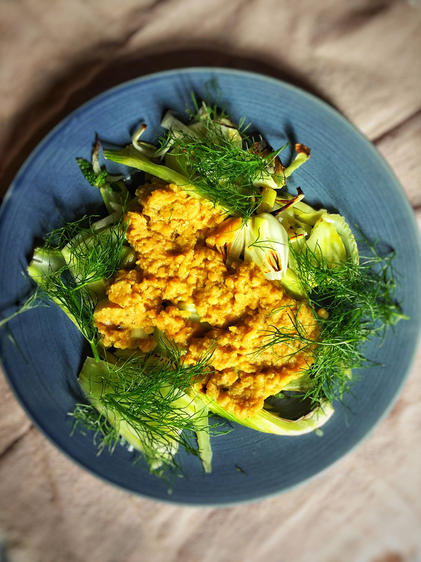 In the years that I’ve been vegan I see a gradual conversion in my family to the Plant Side, so if nothing else may this year’s gathering be a way for me to instill a legacy of healthful, sustainable eating—and a world where our hearts are as full of compassion as our bellies are of plants. 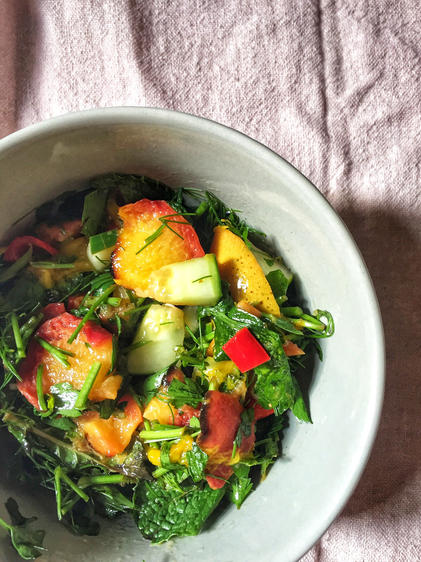 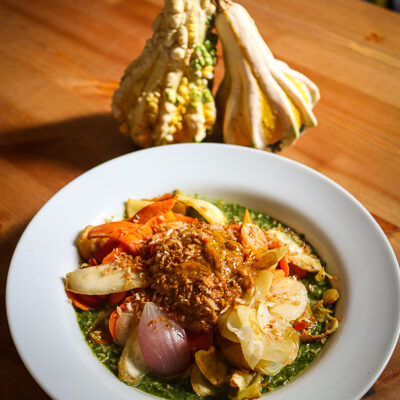 They say it takes twenty-one days to create a new habit—but how long does it take to break one? In my experience, it’s somewhere around four. At least that’s how long it took me to get used to not cooking during my recent stay at […] 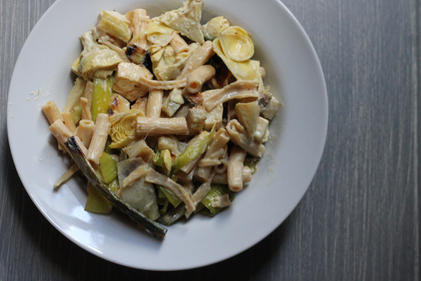 Rules, as we know, are meant to be broken. No white after labor day no longer applies to clothing, so why not apply it to food as well? I’m not usually a pasta girl, but when vata season sets in I start to get […]